The hilarious sequel to “Lend Me a Tenor!”
“Doors slam, trios are sung, seductions are interrupted, faces are slapped and a very good time ensues.”

THIS PRODUCTION HAS BEEN POSTPONED
Directed by Donna Polichetti 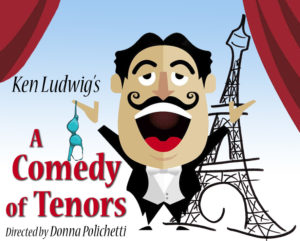 One hotel suite, four tenors, two wives, three girlfriends, and a soccer stadium filled with screaming fans. What could possibly go wrong? It’s 1930s Paris and the stage is set for the concert of the century—as long as producer Henry Saunders can keep the amorous Italian superstar and his hot-blooded wife from causing runaway chaos. Prepare for an uproarious ride, full of mistaken identities, blissful romance and madcap delight.