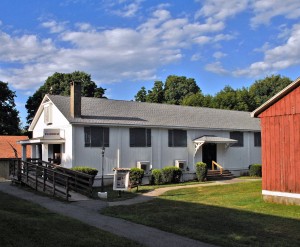 From its inception in 1978 until the late 80’s, Creative Theatre had been performing in schools and in churches. It then became one of the resident companies of the Paramount Theater during late 80s and early 90s. However, the Paramount was too cavernous to work in. In the mid-90’s Margo Smith, granddaughter of the founder of Museum Village, approached the company, offering space in exchange for rent.

It was obvious from the beginning that the only building suitable to make into a theater was the building on the grounds known as the “Town Hall”. The small board of four that existed at that time visited that building and found it to be a barren shell. The general consensus was that it could become a theater. The company only had a little money in the bank. It took all of it to build a stage, buy some seats, install the lighting and make the place workable. It was a very modest beginning.

As time went on the company turned its attention to such theater staples as dressing rooms, bathrooms, costume and prop storage. Then they went back and built themselves a modern computerized lighting system and a handicap ramp.

Each year the company tries to do two or three improvements. Recent projects have included a new roof, air conditioning, improved exterior lighting, a costume loft in the back room, and much more.